A single lens can correct coma in a SCT with spherical mirrors. It can be done with a thin concentric meniscus placed at the inner end of the baffle tube, but it makes image curvature significantly stronger. But if a Schmidt-type plate is placed in front of the secondary, it can eliminate astigmatism and coma with image curvature at the level of aplanatic SCT. Image below shows a practical example in a 200mm f/10 system. 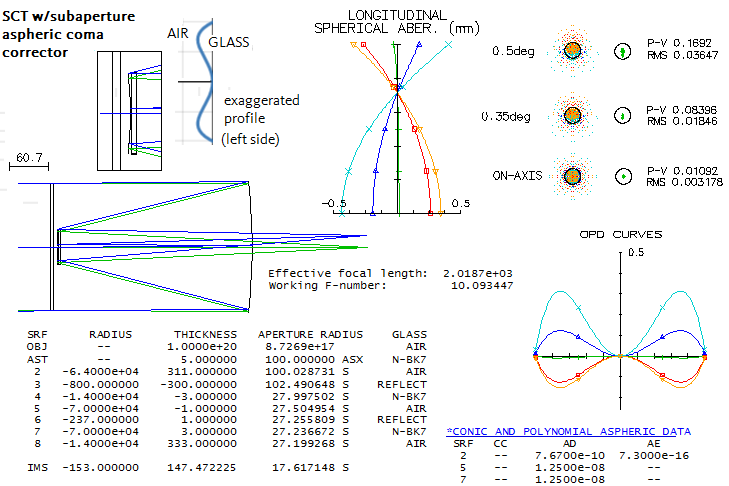 Schmidt profile of the sub-aperture corrector is inversed, as illustrated, and on its other side is a mild radius, to bring the color crossing to the optimal 0.71 zone, while keeping both correctors with the neutral zone at the 71% radius, the easiest to manufacture. Depth of the subaperture corrector is 0.001mm, less than two waves. Spherochromatism remains at a level of the standard SCT. Since the sub-corrector lens induces undercorrection, the full-aperture corrector needs to be about 10% stronger.

In principle, sub-aperture corrector is capable of correcting any single aberration. The difficulty arises from it tending to generate significant multiple aberrations, which may be difficult to match with the aberrations of the rest of the system. Often times, strongly curved surfaces are required, generating significant higher-order aberrations, and/or setting very tight fabrication/collimation tolerances. This is generally less of a problem with more relaxed radii-wise full-aperture correctors, which also can be used to manipulate main mirror's off-axis aberrations by varying the stop location.  For that reason, most of quality catadioptric telescopes are made with full-aperture correctors, despite their often higher cost. To those most common in amateur telescopes will be given consideration in the following pages.